The village of Beynac-et-Cazenac in the Dordogne alone sums up all the charms of the Périgord Noir: a medieval fortress perched on a clifftop, paved streets lined with houses with stone-tiled roofs, the meanders of the River Dordogne below… A magical visit awaits you in Beynac-et-Cazenac during your stay in the Périgord!

Only 10 mins from Sarlat, the pearl of Périgord Noir, the village of Beynac-et-Cazenac is one of the “Most Beautiful Villages of France” and you will soon understand why: built against a cliff, dominated by its famous fortress and located on the banks of the Dordogne, the village offers a picture postcard setting. What’s more, it is just a stone’s throw from your Sandaya campsite! A day worthy of a fairytale awaits you, either conquering its ancient fortress or strolling along the bank of the River Dordogne.

To stay close to Beynac-et-Cazenac and take advantage of the many charms of Périgord, your Sandaya campsite enjoys a privileged location in an exceptional setting. Perfect for all those who love nature stays! A night in a tent or in a fully-equipped cottage, it is up to you to choose how you want to camp. On site, there is a water park with heated swimming pools and waterslides for children where you can cool off between visits. There are also many fun and sports activities for all the family!

Visit Beynac-et-Cazenac with the family

More than a simple visit, a genuine medieval adventure awaits you in Beynac-et-Cazenac! If there is one place to conquer with the family during your campsite stay, it is Château de Beynac, the long-standing rival of the no less famous Château de Castelnaud that stands on the other side of the river. Let’s go!

As soon as you pass through the castle’s doors, you will learn all about its role during the Hundred Years War, as well as the adventures of Richard Lionheart and Eleanor of Aquitaine. Over nine centuries old, the castle has many stories to tell! Without a doubt, its greatest treasure is its keep, the highest and oldest part of the castle. From its terrace, there is a spectacular viewpoint over the Dordogne Valley! 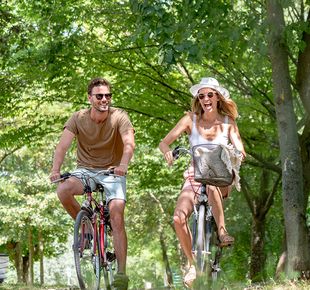 Visit Beynac-et-Cazenac as a couple

Beynac-et-Cazenac can be visited in a multitude of ways. The one that will most delight those in love is no doubt a trip along the Dordogne in a traditional “gabarre” boat! Used for many years to transport walnuts, timber and wine to Bordeaux, nowadays Beynac-et-Cazenac’s “gabarres” are available to visitors looking for a unique experience. There is nothing quite like it for enjoying an exceptional view of Beynac-et-Cazenac and its castle!

On the way to Château de Castelnaud, be sure to stop off at the famous hanging gardens of Marqueyssac, without a doubt the most romantic site in all Périgord. A listed site, this 22 ha park offers an enchanting walk among its thousands of hand-pruned boxwoods!

Camping Beynac-et-Cazenac: our handy tips for a successful stay

Did you know? The Château de Beynac-et-Cazenac has provided the setting for many films, including “Les Visiteurs”!

All summer, the castle offers audio guide tours for the many visitors and booklets are freely available!

Do you enjoy big thrills? Fly over Beynac-et-Cazenac and the entire Dordogne Valley in… a hot-air balloon!

Open from mid-June to mid-September, discover the famous farmers’ market in Beynac and its stalls packed with a multitude of flavours!

Yearning for new horizons? Let our Sandaya campsites inspire you!